Crowds call for PM resignation, heckle ministers in front of Parliament - The Independent 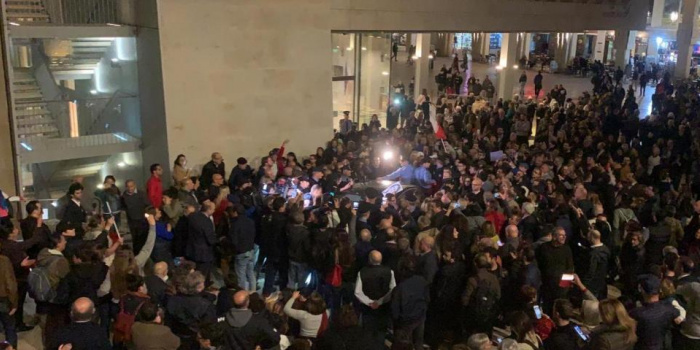 There were some tense moments in Valletta this evening as protesters gather outside Parliament and heckled ministers as they walked out, as The Independent reported.

The protest escalated at the end of manifestation which started in front of the PM's office in Castille, continued near the Law Courts and ended outside the Parliament building.

Two police officers were injured, with one of them apparently hit by a car as it was being driven away.

The two officers were later named by Justice Minister Owen Bonnici as Inspector Priscilla Caruana Lee and constable Darren Darmanin. Bonnici said that had spoke to the inspector and said that both officers had suffered slight injuries.

There were also suffles between the protesters and the police.

The protesters descended on Valletta this evening to demand the resignation or removal of Prime Minister Joseph Muscat.

They are calling on Muscat to either resign or, short of that, for parliament to exercise its power to remove him from his post.

The protest, organised by civil society groups Repubblika and Occupy Justice, comes after the arrest of Yorgen Fenech this morning.

The protesters gathers in front of the Prime Minister's office, many of them carrying placards showing the photo of slain journalist Daphne Caruana Galizia and messages calling for an end to corruption and resignations.

A poster with the words "Le ghall-korruzzjoni" was hung across the main door leading to the PM's office.

The protesters later walked to the Law Courts, where the Great Siege Monument opposit the building has served as a makeshift memorial to slain journalist Daphne Caruana Galizia, where the national anthem was sung.

On their way out of the city, the protesters stopped close to the Parliament building where government MPs were heckled as they walked out the building.

A main target was Justice Minister Owen Bonnici, who is responsible for the department which clears up the flowers and candles that are placed at the foot of the Great Siege Monument. "Do the flowers bug you", protesters shouted.

Others covered cars used by ministers with the posters they were carrying.