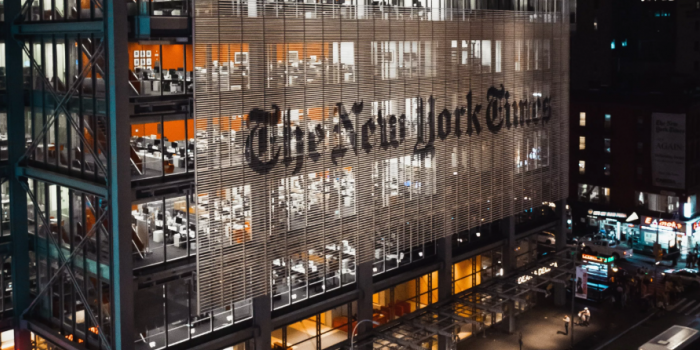 The New York Times has axed dozens of jobs, bringing to an end its resistance to making Covid-19 cuts, as Press Gazette reported.

No newsroom or opinion page jobs have been lost, with the axe falling primarily on the advertising department, the email said. As part of the cuts, the NYT is closing its experimental marketing agency Fake Love.

The New York Times was among a select group of large US news businesses that were able to resist making Covid-19 job cuts as the pandemic damaged the global economy in March and April.

In an interview in mid-April, when many other news businesses had already begun cutting costs, Thompson explained that the group is more resilient than others because it has built up a large subscription base and so is less reliant on advertising.

Reporting its first-quarter results in early May, the New York Times Company revealed that interest in coronavirus had led to a record period for new subscribers – taking its total across print and digital to above 6m. But its advertising revenues were down 15% in the first three months of the year.

Tuesday’s email to staff said the job cuts were taking place across divisions of the company that have been hit hard by the coronavirus crisis.

But it added that the cuts are consistent with the NYT’s long-term strategy of transforming itself from a newspaper company into a multimedia digital news provider.

Press Gazette
Liked the article?
Help us be even more cool!
Other news