On June 24, Shevchenkovskyi district court of Kyiv city selected pre-trial restriction for the head of the online media outlet “Strana.ua” Ihor Huzhva – arrest for two months, with an option of bail-out for 544 thousand hryvnias. The press secretary of Kyiv prosecutor's office Nadiya Maksymets informed about this decision of the court, Interfax-Ukraina reports.

According to Maksymets, Huzhva was also bound to surrender all passports that can be used for travelling abroad.

Huzhva himself said during the court session that the case against him was "purely a provocation”, Ukrinform reports.

“This is clearly a provocation, which was prepared with one goal – to frame me, which failed, but they still decided to force it through the way they did”, Huzhva said.

According to him, it's not about blackmailing MP Dmytro Linko, “it is done to destroy the online media outlet “Strana” and to imprison me”.

“There are two tasks the authorities want to resolve using this case. I emphasize that this is the fourth frame-up criminal case created against me”, Huzhva said. 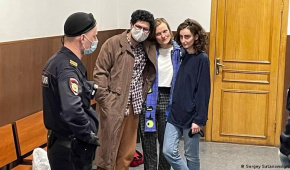 IFJ/EFJ call for immediate release of jailed Ukrainian journalist
Blogs
Sanctions against Medvedchuk’s TV channels. The first estimates
Want to learn first about the new research of the Institute of Mass Media? Subscribe to the newsletter!