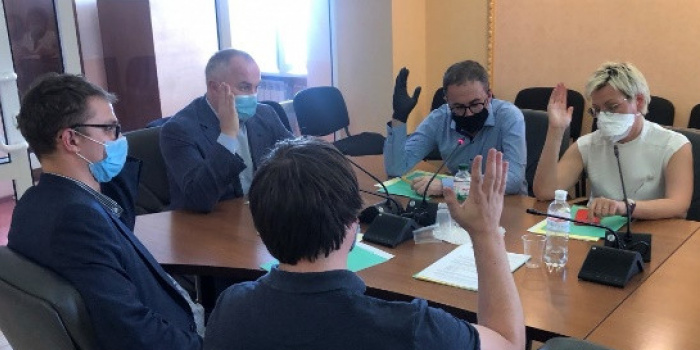 Committee of Freedom of Speech

The Verkhovna Rada Committee on Freedom of Speech proposes to set up a working group and introduce criminal liability for the sale of fake journalist IDs.

This was discussed on November 3 at a meeting of the committee during the consideration of the agenda "On prevention of sale and further illegal use of journalistic certificates."

"I think this phenomenon is shameful, it must be stopped. And those who do this must be punished. That is why I propose to make a separate article of criminal liability for forgery of journalistic certificates, ”Shufrych said during the consideration of the issue.

According to Shufrych, the committee cooperates with the law enforcement committee and "we can co-author the law."

After the discussion, the committee members decided to ask the National Union of Journalists of Ukraine and the Commission on Journalistic Ethics to submit proposals to address this issue.

As IMI reported, on December 3, 2020, the executive director of the Institute of Mass Media, Oksana Romanyuk, commented to Detector Media on the news of the sale of press cards by the NGO “Journalists Against Corruption”, headed by Serhiy Kot. The Romanyuk's comment was published that day on the IMI website as well.

On December 209, 2020, the Commission on Journalismtic Ethics has issued a public condemnation of Serhiy Kot, editor-in-chief of news agency “Journalists against Corruption", and demanded to stop granting journalistic status to the persons who did not practice journalism, as well as to stop the advertising campaign to attract such "journalists".

CJE found that the mentioned publications by IMI and Detektor Media had not infringed the Code of Ethics of Ukrainian Journalists, and the facts mentioned in the texts were true.

At the same time, the Commission found in Serhiy Kot's actions a gross violation of the Code of Ethics for Ukrainian Journalists, in particular paragraph 17: "Illegal receiving of profit or any benefits for any journalistic material done or not done is incompatible with the status of a journalist. A journalist must not use his (her) official position for private profit, with the purpose of easy money, self-advertisement, making his (her) own ways up or willing to please any powers or individuals. A journalist has no right to use financial data before publishing with the purpose of his (her) own enrichment." and publicly condemned Serhiy Kot.

On January 21, 2021, we learnt that the National Police had instituted criminal proceedings against Oksana Romaniuk, a member of the “Media Movement” and executive director of the Institute of Mass Information, on a claim filed by Serhiy Kot, the head of the “Journalists Against Corruption”. On December 31, 2020, Serhiy Kot filed the complaint for the comments of Mrs Romaniuk published by “Detektor Media” about the trade in press cards issued by the NGO “Journalists Against Corruption”.

On January 24, the Media Movement emphasizes that the practice of selling press cards to persons who do not perform any journalistic activities and do not adhere to the ethical norms of the profession undermines trust in journalists and mass media. Such practice must be stopped, the Media Movement said. The Media Movement called on the National Police to immediately investigate the actions of the NGO "Journalists Against Corruption" and to refrain from persecuting activists for comments in mass media..

On January 26, police of Volyn region opened the criminal proceedings against the Commission of Journalism Ethics and its chairman Andriy Kulikov, based on the complaint filed by the chief editor of news agency "Journalists against Corruption" and head of the ONG "National Union of Independent Journalists of Ukraine" Serhiy Kot.

Last August, it became known, that the criminal proceeding against Andriy Kulikov, Chairman of the Commission on Journalistic Ethics (CJE) was dismissed. The probe had been launched by Volyn police after complaint filed by Serhiy Kot, editor-in-chief of the Journalists Against Corruption news agency. But another proceeding on the same issue, initiated after Serhiy Kot’s complaint against Oksana Romanyuk, executive director of IMI,is still under investigation.