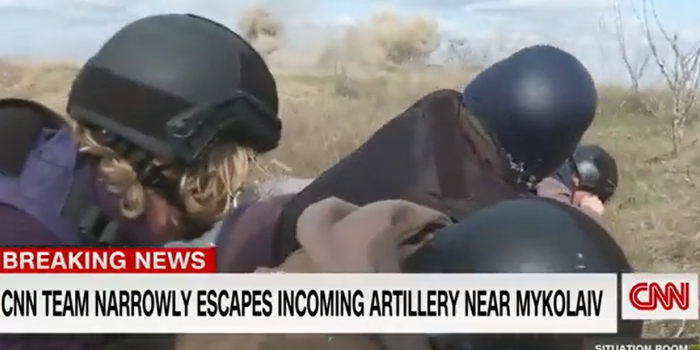 A CNN team at a crossroads just south of Mykolaiv, near the town of Oleksandrivka, was just meters away from incoming artillery rounds on Monday, leaving their vehicle destroyed, as CNN reported.

The team managed to leave moments later, experiencing what regular Ukrainians are living daily during this war.

CNN's Senior International Correspondent Ben Wedeman, producer Kareem Khadder, photojournalist John Torigoe, translator Valeriia Dubrovska and their team had stopped at the crossroads to speak with a few Ukrainian soldiers who were behind a berm. As Wedeman was filming a standup wearing full body armor, they witnessed a "very large incoming round impact uncomfortably nearby and took cover." The impact was about 150 meters away from their location.

The team hit the ground as another round came in.

"We hugged the ground and then ran for the cars. We jumped in our Mitsubishi Pajero, but it was destroyed. The car wouldn’t start. At least two of the tires were flat. All the windows shattered. The tank was punctured and leaking diesel and other fluids," Wedeman reported.

The team ran to their other vehicle, which also had damage due to shrapnel, got in and drove off.

None of the CNN team was injured.

Russia's bombardment of Mykolaiv in southern Ukraine near the Black Sea continued on Monday as it has for weeks, with strikes through the morning and afternoon there.

Last Tuesday, more than 31 were killed following a Russian strike on the office of the regional military governor of Mykolaiv.