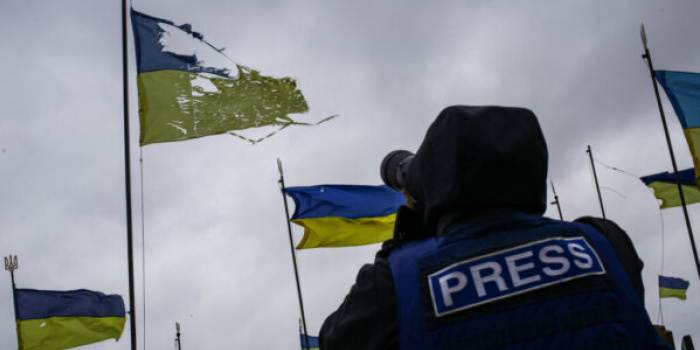 Since the beginning of Russia's full-scale invasion, the Ukrainian media have been actively sharing video interviews with Russian POWs, and some journalists now specialize in this topic.

The Commission on Journalistic Ethics considered it necessary to respond to such content and provide some recommendations for covering the subject of POWs in the Ukrainian media.

Regarding the interviews made by journalists (Lyubomyr Ferens, Volodymyr Zolkin, Dmytro Karpenko).

For the most part, such video interviews follow one pattern. At the beginning of the interview, the journalist asks the prisoner about his birth date and age, his place of residence, if he has any relatives, etc. The description to the video contains these details as well.

The conversation resembles an interrogation; the journalist can resort to insulting the person he interviews and his relatives, impose his assessment of things. When a captive spoke about having been beaten at some point, one journalist responded by saying, "Well, they didn't cut anything off though, did they."

The journalist asks the interviewee for consent for the interview to be recorded on video and made public. However, the audience knows nothing about the circumstances in which this consent was obtained. For example, Volodymyr Zolkin and Dmytro Karpenko promise their interlocutors to arrange a call to their relatives. Volodymyr Zolkin said that he demands that the prisoners answer his questions, otherwise they will get no call home. The faces of the relatives whom the journalist contacts via video call are also displayed on screen.

Videos on Volodymyr Zolkin's YouTube channel are watermarked with the logos such as "Military Intelligence", "National Police", or "Coordinating Headquarters for the Treatment of Prisoners of War".

Mass media also record short interviews with Russian POWs while making reports from the detention facilities where the POWs are being held. Some media (ICTV, Radio Liberty, ТSN) blur the faces of the interviewees, even those who personally consented to being interviewed. In other media, the faces of the POWs with whom the journalists are talking are visible (Suspline).

In Lyubomyr Ferens's video report about a camp for Russian POWs in Ukraine, the faces of the prisoners are shown, and their surnames are mentioned. The video shows the facility's employee taking the journalist to the premises where the prisoners are kept. The interviews recorded at the institution later were made into separate videos on the Lviv.Media YouTube channel. The journalist does not mention the circumstances of obtaining consent to the interviews, nor whether there were any of the institution's employees present during the recording.

Regarding the use of POW videos recorded by law enforcers or special services in the media (Espreso, NV, Rayon.in.ua)

Such content often lacks citations of the source, and they can be perceived as created by the journalists themselves, rather than recorded as part of the investigation or at the moment of surrender.

In such videos, some captives are filmed blindfolded, wounded, in need of first aid, or in a hospital (UNIAN).

The public interest towards video interviews with Russian POWs is understandable and justified. Russia's war against Ukraine is not only Putin's war. In this war, specific Russian citizens are killing Ukrainians, and interviews with POWs provide an opportunity to obtain testimonies from the Russian military.

At the same time, the Commission on Journalistic Ethics believes that Ukrainian media have developed a negative practice of covering the subject of Russian military POWs.

The 1949 Geneva Conventions provide for the humane treatment of POWs, including protection against public curiosity, acts of violence or intimidation, and coercion to sharing information.

This applies to displaying photos or video recordings of POWs, disclosing the recordings of interrogations, private conversations, personal correspondence, and any other private details, as Human Rights Watch noted, calling on Ukraine to respect the rights of POWs. The organization said that "Ukrainian authorities should stop posting on social media and messaging apps videos of captured Russian soldiers that expose them to public curiosity, in particular those that show them being humiliated or intimidated, Human Rights Watch said today. Such treatment of prisoners of war, or POWs, violates protections under the Geneva Conventions intended to ensure dignified treatment of captured combatants on all sides."

According to the human rights activists, "it is important for the media to refrain from broadcasting or republishing material of POWs that violates the laws of war."

In particular, showing a person's face, making public their first and last name, date of birth, place of residence, information about their relatives is a violation not only of the Geneva Conventions, but also of Article 3 of the Code: "A journalist must show respect to a person's private life. This does not exclude the journalist's right to investigate into certain events and facts, if the public significance of the information collected and distributed by the journalist overweighs a person's private interests."

Many journalists equate "POWs" with "criminals", call the POWs "collaborators", "murderers", etc., thus violating Article 4 of the Code: "The coverage of court proceedings must be impartial towards the accused. A journalist cannot call a person a criminal until the court makes a corresponding decision."

The Commission on Journalistic Ethics believes that, by posting videos watermarked with "Military Intelligence", "National Police", or "Coordinating Headquarters for the Treatment of Prisoners of War", Volodymyr Zolkin and Dmytro Karpenko are abusing their journalist status and violating Paragraph 2 of the Ukrainian journalist's Code of Ethics: "Serving the interests of the government or the media's founders, and not those of the society, is a violation of journalistic ethics."

Mass media that share video content recorded by law enforcement agencies or special services without citing the source and without an appropriate editorial comment also violate this paragraph of the Code.

The Commission on Journalistic Ethics recommends that journalists and editors adhere to the provisions of the Geneva Conventions and the Ukrainian Journalist's Code of Ethics while covering subjects related to Russian POWs.

As IMI reported, the working group of the Coordination Headquarters for the Treatment of Prisoners of War has provided recommendations for those released from captivity, their relatives, the relatives of those gone missing under special circumstances, and journalists regarding speaking with the media.