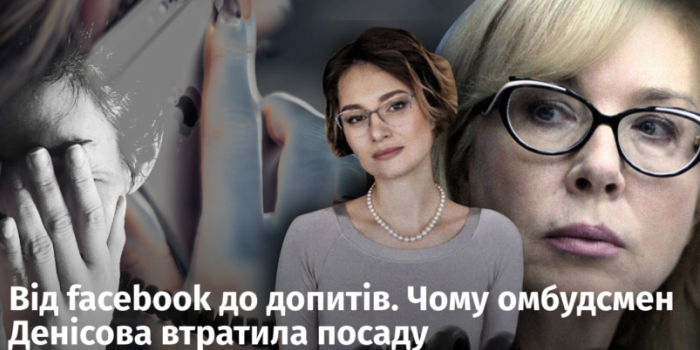 The Commission on Journalistic Ethics published their conclusions regarding Mykhailo Dumych's complaint about "Ukrainska Pravda's" article "From Facebook to interrogations. Why did Ombudswoman Denisova lose her post" (author – Sonia Lukashova, June 27, 2022). This is reported by Detector Media.

In particular, Dumych pointed out that "no source cited in the article has been identified or verified, a quote from 'UNICEF's response to the publication's request' is provided, but the sheet of the request was not shown." Also, the author of the complaint believes that "the article caused a backlash in the society" and was used, in particular, "by propagandist Solovyov at the time when reports of a missile attack on a shopping center in Kremenchuk and the shelling of Kharkiv were coming."

On July 11, the Commission wrote to the editorial office of "Ukrainska Pravda" with a request to comment on the arguments presented by the complainant.

On July 19, in a reply letter addressed to the Commission, the editorial office of "Ukrainska Pravda" denied the accusations of violation of journalistic ethics, in particular, the use of anonymous or unverified sources:

"The material used official data of the National Police of Ukraine ('As of the end of June, the police has launched 20 similar investigations'), comments of human rights acrivists Larysa Denysenko and Tetyana Pechonchyk, UNICEF's response to the request, public statements and posts by Lyudmyla Denisova and her daughter, psychologist Oleksandra Kvitko.

"Anonymous sources were also cited in the material, which meets the standards of "Ukrainska Pravda" as well as international media. The editors know who the sources are, why and how they got the information, and why they shared it with the journalists."

"Ukrainska Pravda" noted that they contacted ex-Ombudswoman Lyudmyla Denisova and her daughter Oleksandra Kvitko, asking for a comment, but could not get a response from Denisova, and Oleksandra Kvitko refused.

"The editors believe that the article performed important functions: a) explained the reasons for Lyudmyla Denisova's dismissal, which the authorities did not do; b) informed about the official's improper behavior and possible abuse, which is important for the accountability of the authorities and the prevention of such behavior in the future; c) separated this behavior from the actions of Ukraine as a state in general, that is, it stated that the false data voiced by Denisova does not mean that the russian occupiers were not committing war crimes," the letter of the UP states.

After studying the editor's position, CJE came to the conclusion that the material "From Facebook to interrogations. Why did Ombudswoman Denisova lose her position" raises a poignant and socially important topic. At the same time, the Commission pointed out the importance of observing the criterion of citing anonymous sources, citing the example of the Associated Press editorial policy:

• The content is information, not opinion or speculation, and is vital to reporting.

• The information is not available except under conditions of anonymity established by the source.

• The source is reliable and may have direct access to the information.

As the representatives of the Commission noted, "Ukrainska Pravda's" article does not contain explanations as to why the sources requested anonymity and under what conditions. At the same time, according to CJE's conclusions, the reader knows nothing about the motivations of the unnamed sources who are not onlookers from outside, but people from inside the "system."

"Anonymous sources must be sufficiently competent and have first-hand information. While in the article these sources are identified very broadly ("one of the employees of the (Ombudwoman's) Office"). It is not clear whether this employee had direct access to the information (for example, participated in meetings, got acquainted with the documents), or whether they were retelling what they had heard from someone else," the CJE representatives noted. "The use of anonymous sources is justified if the information cannot be obtained in any other way. "Ukrainska Pravda's" text does not indicate whether the journalist made any attempt to obtain information in a formal way, for example by submitting a request to the Prosecutor's Office."

The Commission considers not providing the audience with any details on the anonymous sources to be a sign of a violation of the Code of Ethics: "All these details are important for the audience to form trust in the information sources cited by the journalists. In this case, the editors avoided additional details."

CJE's conclusions and recommendations include the following:

"The Commission on Journalistic Ethics welcomes the desire of the editorial staff of "Ukrainian Pravda" to discuss poignant, socially important topics, regardless of surnames or possible backlash. This is precisely the mission of journalists.

"However, the editors' work on a resonant topic is always a collective effort, even if the article is signed with one name only. The Commission believes that the editorial control of adherence to professional ethical standards during the preparation of this publication was insufficient.

"After reviewing the complaint about the article 'From Facebook to interrogations. Why did Ombudswoman Denisova lose her position,' the Commission on Journalistic Ethics found a violation of para. 6, 9, and 10 of the Code of Ethics of a Ukrainian Journalist and issued a warning to 'Ukrainska Pravda' and journalist Sonya Lukashova.

"The Commission on Journalistic Ethics condemns the attempts to pressure the article's author, Sonya Lukashova, and the editor-in-chief, Sevgil Musaieva, and calls on Ukrainian authorities to investigate the threats against the journalists."

CJE also published recommendations for journalists and editors who are working on critical publications and investigations.

It will be recalled that in Sonya Lukashova's article, which was posted on the UP website, Denisova was being accused of making up some of the russians' sexual crimes in Ukraine with references to anonymous sources.

After a wave of criticism on social media, the editors changed the headline from "From Facebook to interrogations. How Ombudswoman Denisova made up the crimes of russians and lost her position" to "From Facebook to interrogations. Why the Ombudswoman lost her position" without explanation. After that, the discussion around the article intensified.

Sevgil Musaieva emphasized that "Ukrainska Pravda's" mistrust in the information provided by Lyudmyla Denisova arose even before the beginning of russia's full-scale invasion and further intensified when it proved impossible to verify the information about sexual crimes committed by russians in the Kyiv region.

Lyudmyla Denisova herself called the UP article paid for and untrue.