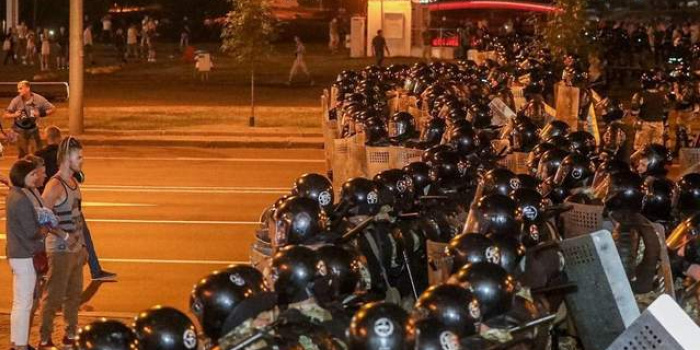 We, the representatives of the NGOs, appeal to national and international designated institutions about the danger that has befallen the Belarusian people and the state of Belarus, and the threat of authoritarianism looming over the whole of Europe.

On May 23, 2021, as a result of illegal actions sanctioned by the self-proclaimed president of Belarus, Aleksandr Lukashenka, a Ryanair passenger aircraft was forced down in Minsk to illegally detain and arrest Roman Protasevich, the founder of the opposition Nexta channel on Telegram.

Aleksandr Lukashenka came to power in Belarus 27 years ago and, after the disputed elections in August 2020, he has continued to retain it by the suppression of political protest and the unprecedented persecution of politically active citizens. During his rule, Lukashenka has degraded the very concept of ​​the separation of powers, facilitated the withdrawal of the Belarusian language from the public sphere, and eliminated all opposition to his regime. During this time, such fundamental democratic institutions as free and fair elections and independent media have been consistently eliminated in Belarus; proper protection of human and civil rights and freedoms has become impossible. Belarus is still not a member of the Council of Europe and, therefore, does not fall under the jurisdiction of the Convention for the Protection of Human Rights and Fundamental Freedoms and the European Court of Human Rights. The death penalty is still in use in Belarus. Belarus’s state television is a de facto copy of Soviet television with all its inherent tendency to polarize, lie and praise the country’s leader.

Frightened at the prospect of losing his untrammeled power, Lukashenka regularly intimidates citizens with “Maidans” and “Ukrainian fascism”. Opposition activists daring to take part in the protests have been brutally repressed and some killed. Without exaggeration, the Lukashenka regime can be compared with the dictatorial regimes of 1930-1950. Thus, international human rights organizations’ make statements about numerous infringements on human rights that can rise to the level of crimes against humanity – persecution and deportation. Specifically, there have been repeated calls to initiate proceedings against Lukashenka in the International Criminal Court. Amnesty International, an international human rights organization, has documented a number of systematically violated rights, including numerous cases of inhuman treatment and torture, suppression of freedom of expression and the effective elimination of the right to peaceful assembly. Recently, the situation has become even worse: new bans were issued regarding the media and coverage of protests. All this exists in the context of the constant threat of the death penalty. In addition, in the situation of the illegal, forced landing of a civil aircraft, not only has Belarus violated international human rights law (which still applies to it as part of customary international law and to the extent provided by the International Covenant on Civil and Political Rights), it has also violated the Convention on International Civil Aviation because, according to aviation law experts, using a jet fighter was a measure extremely disproportionate to the alleged threat.

Due to growing international isolation and unwillingness to leave power democratically, Lukashenka has entered into numerous political arrangements with Vladimir Putin, who has also been reluctant to relinquish power in Russia for more than two decades, switching pro forma between the positions of president and prime minister. The idea of ​​the so-called “Union State” is nothing more than an attempt by the Russian Federation to slowly annex Belarus – a dangerous technology that Russia has repeatedly tried to apply in Ukraine, Poland and other states over the past three centuries. Thus, an entire state and its people with a long history and culture might disappear from the map of Europe in the near future. At the same time, it should be noted that any integration into the Russian Federation usually brings with it marginalization and complete assimilation for integrated peoples, including the loss of their own language and cultural traits.

Russia’s strategy is to use satellite states to maintain influence in the region and demonstrate power on a global level. Those resisting Russian political influence have got pseudo-republics within their sovereign territory: Transnistria in Moldova, Abkhazia and South Ossetia in Georgia, and occupied Crimea and part of Luhansk and Donetsk regions in Ukraine.

Europe and the world at large were late in providing a proper response to “Belarusian Milosevic”. Chamberlain’s “peace for our time” proved unsustainable. Dictators understand only the language of power – economic, political or even military. Especially so the dictators born of the totalitarian USSR, a country that exterminated tens of millions of its own citizens.

There are many people in Belarus holding the opposite views to Lukashenka’s, those who see their state as free, democratic and sovereign. Today, these people are in mortal danger as the ageing dictator – fearing responsibility and losing power – is increasingly dabbling in conspiracy theories looking for enemies not only outside the country but also within. Eastern Europe already knew an example of such a dictator, Joseph Stalin, whose government was responsible for the extermination of millions of innocent victims of the Soviet Union’s totalitarian regime.

The Independent Media Council already made a statement citing numerous cases of violations of journalists’ rights in Belarus and the actions to be taken by Ukrainian and foreign governments. No proper response was offered and today, the situation has become much more dangerous. The world must, therefore, respond in the harshest way possible to the unlawful tyranny of the Lukashenka regime, as well as provide the most help to those opposing such a regime and/or escaping from it, and working to protect human rights in Belarus no matter what to bring to justice those responsible for a mass violation of fundamental rights and freedoms (in particular, in the International Criminal Court on the basis of the UN Security Council Resolution). In this regard, the undersigned NGOs note the following:

We are convinced that only a united Europe, with its palette of countries, ethnic groups and cultures, will be safe if there is no place for fascism, Nazism, populism and dictators on its territory. After all, cultures and values ​​require not only expressions of deep concern, but also real, harsh reactions preventing any encroachment upon democratic values – not by words, but ​​by deeds. And now is the time.

NGO Center for Democracy and the Rule of Law

For seven years imprisonment sentenced torturer of Maidan residents
Blogs
Sanctions against Medvedchuk’s TV channels. The first estimates
Do you want to be first to learn about the new research of the Institute of Mass Information? Subscribe to the newsletter!