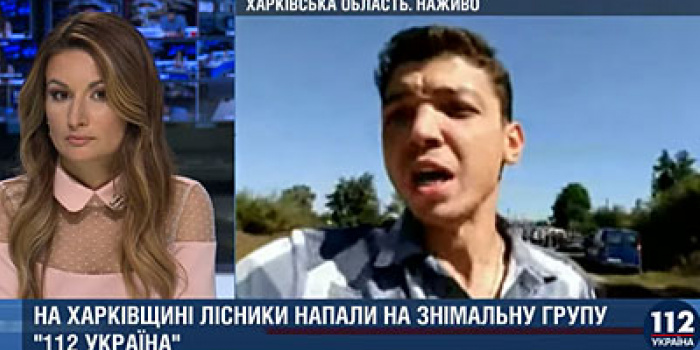 The judge sentenced the persons who had used fore against the TV chew of "112 Ukraine" in 2019 in the village of Zolochiv to two years on probation and others were fined (5100 uah or around $184). The journalist Oleh Reshetnyak wrote about this on his Facebook page, as “Detektor Media” reported.

“Almost two years later, on March 4, we finally won the lawsuit over the attack on our film crew. Then we were filming a high-profile story about foresclearing of Black forest. Two attackers got two years on probation. Five others got fines of UAH 5,100. Why is this important? The vast majority of cases of attacks on the media are derailed. Beating journalists in our country, this is standard thing. But we have shown that our profession is protected by law, ”Reshetnyak wrote.

As IMI reported, on August 28, 2019, the TV crew of “112 Ukraina” was attacked by the administrative forestry enterprise employees in the village of Zolochiv, in Kharkiv region. The incident happened while the journalists were shooting a story about a forest theft. According to the channel, forestry workers blocked the car of the TV crew and punched the wheels, and also threatened with physical violence.

The journalist of the TV channel Oleg Reshetnyak could call the police, who arrived to the spot, but did not intervene: the policemen were observing the happening without trying to intervene, as the report says.

Oleg Reshetnyak made live stand-up and described what was happening, but they saw it and seized  by force his camera. “We were filming one of the forestry management enterprise, we launched a quadcopter to see the scale of the entire forest production, and then the workers, an aggressive lawyer, ran out. Now the wheels are completely deflated, the car is  blocked. Now, according to our information, the CORD special police group is on the way. Right now, they are requiring us to give them flash drives, to which we have stored our videos, and we refuse to give them away. We are constantly threatened with violence, they are swearing, a car with European plate is there, it blocked the road, the wheels are deflated, ”-  Reshetnyak told. Also, as to the TV channel, Oleg Reshetnyak was beaten.