Appeal by NGOs and associations for Khaled Drareni’s release - RSF 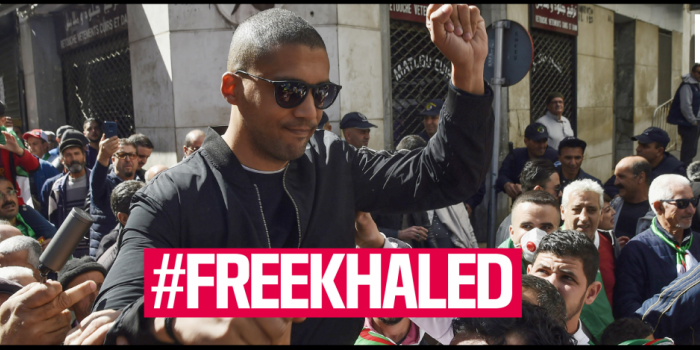 Photo creditM RSF
International and Algerian NGOs and associations call for Khaled Drareni’s immediate release and for the withdrawal of all charges against him, as Reporters sans frontières reported.
The text of statement follozws:

We, international and Algerian NGOs and associations, issue an appeal for the immediate release of journalists imprisoned in Algeria and for the withdrawal of arbitrary judicial proceedings against them.

Khaled Drareni, the Algeria correspondent of Reporters Without Borders (RSF) and TV5 Monde and editor of the Casbah Tribune website, has been imprisoned since 29 March on a charge of “inciting an unarmed gathering and endangering national unity.”

We ask President Abdelmajid Tebboune, as guarantor of respect and implementation of Algerian’s constitution, to intervene at once to put a stop to the harassment of independent journalists.

Under article 50 of the Algerian constitution, a press offence cannot be punished by imprisonment. Bringing criminal charges against journalists in connection with their work therefore constitutes a violation of the constitution.

We call on the judicial authorities not to assist the regime’s attacks against Algerian citizens and not allow themselves to be used by parties hostile to freedom and pluralism.

We urge Algeria’s political class to adopt a clear position in support of a free, independent and pluralist press, an essential condition for a public democratic debate.

We encourage journalists in Algeria and all over the world to express their solidarity with their imprisoned colleague and, through their media and professional organizations, to make the public aware of the injustice suffered by Khaled Drareni and all other arbitrarily prosecuted journalists in Algeria, including Sofiane Merakchi, libanese TV channel Al-Mayadeen’s correspondent in Algiers, who has been jailed since 26 September.

The NGOs and associations signing this appeal regret that the Algerian authorities are taking advantage of the coronavirus epidemic to settle scores with independent journalism.

Imprisoning people in the middle of a pandemic is to compound a violation of basic rights with an act of physical endangerment.

Signatories of the statement: