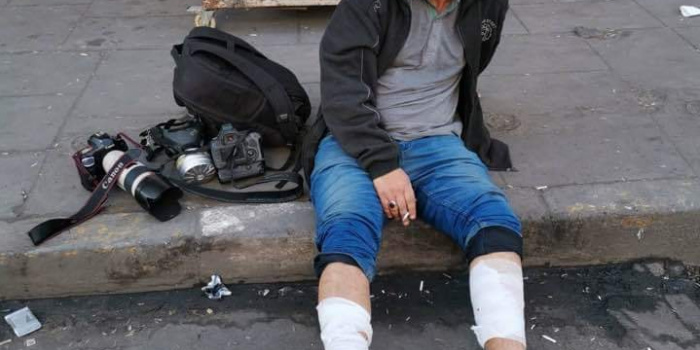 On February 21, 2020, Iraqi riot police in Baghdad’s Al-Kilani Square shot Ahmad al-Rubaye, an Iraqi photographer for the French news agency Agence France-Presse, with rubber pellets that hit his back, legs, and right shoulder, according to news reports, a statement by the local press freedom group Journalistic Freedoms Observatory, and the journalist, who spoke to CPJ via messaging app, as Committee to Protect Journalists reported.

Al-Rubaye told CPJ that he was covering clashes between protesters and police when he was attacked. Protests have taken place throughout Iraq since October over a lack of basic services, unemployment, and alleged government corruption, and have seen hundreds killed, according to news reports.

“I tried to run away but an officer shot me directly even though it was clear that I was a photojournalist because I was carrying my camera and photographic equipment,” he told CPJ.

Al-Rubaye said he was bleeding from the attack, and that protesters carried him from the scene and took him to a medical tent on Tahrir Square. At the tent, paramedics told al-Rubaye to go to the nearest hospital for examination and treatment, he said.

He went to a private hospital, but staffers told him that there were no doctors available and that his legs were too bloody to take x-rays, al-Rubaye said. He then went to a public hospital, where he was admitted and examined, and a doctor told him that he still had four pellets in his legs and one in his shoulder, the journalist told CPJ.

Al-Rubaye said he did not want to be treated there, as he wanted to ensure that the pellets could be removed without damaging any nerves or blood vessels, and did not trust the services at Iraq’s public hospitals.

He told CPJ that a surgeon told him that the pellets, which can cause infection and be toxic to the body, should be removed as soon as possible. Al-Rubaye told CPJ on February 24 that he had not yet found a surgeon capable of removing the pellets, and said he was still in pain and his wounds were still bleeding.

On February 29, al-Rubaye posted on Facebook that he had successfully undergone surgery the previous day, and was “fine.”

The Iraqi Interior Ministry did not reply to CPJ’s emailed request for comment.

At least five journalists have been killed since the protests started, according to CPJ research.