23.3% of news in online media based on social media - IMI research

The source for every fourth news in web-based editions were social networks ( 23.3% of the total number of news). Most frequently, during the survey period, the journalists have been quoting Prime Minister Oleksiy Goncharuk's Telegram channel.

Such are the results of the monitoring survey held by the NGO Institute of Mass Information on January 2020 which covered 1700 news items from 17 popular news websites.

The IMI experts noted that the most often these were the editions “Obozevatel”, Znay.ua and TSN which picked newsworthy events from social networks. 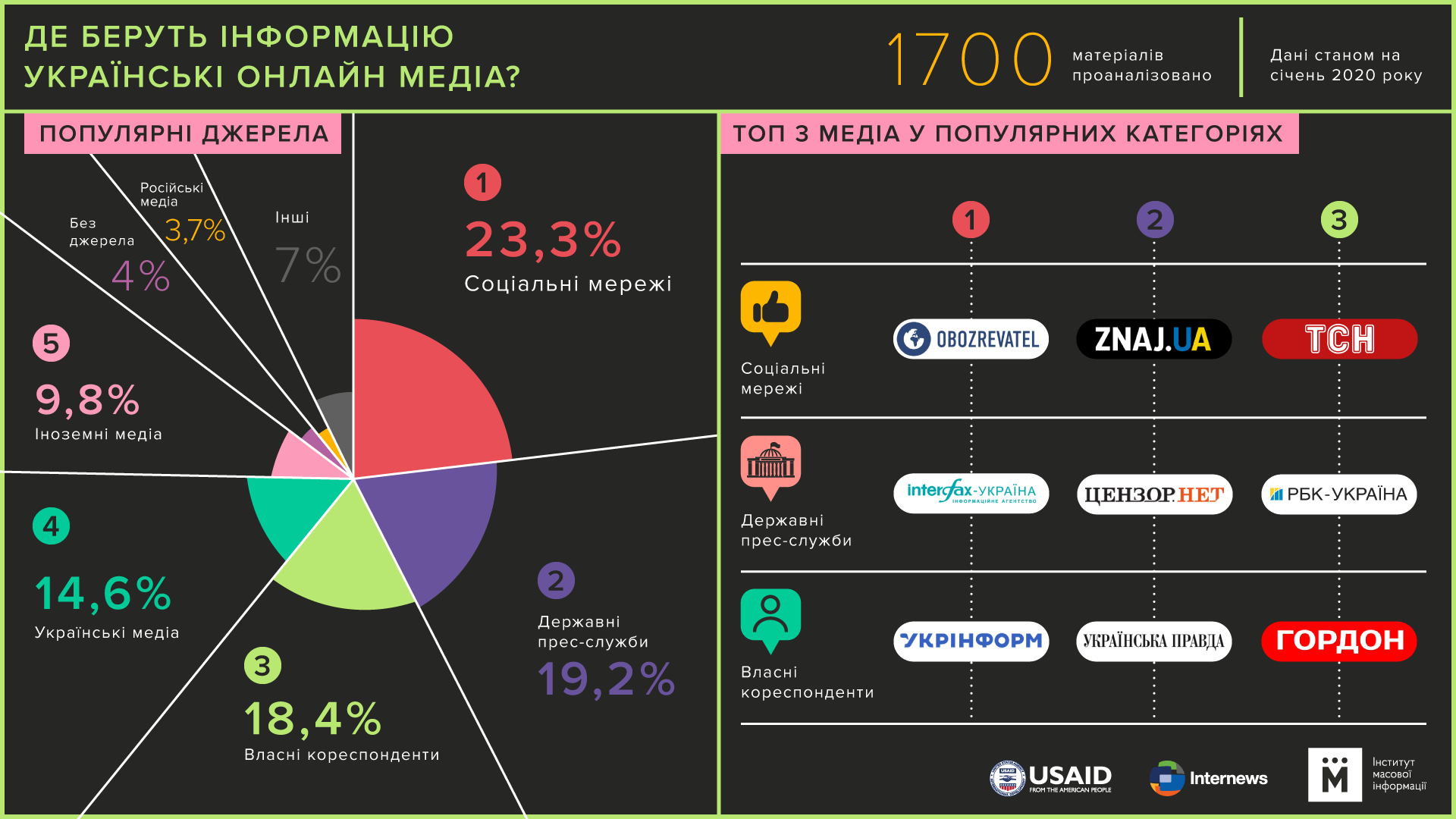 In 19.2% of the total news sources, these were the press releases and news from official government agencies that served source of information. The official websites of the President of Ukraine, the Security Service of Ukraine, the Prosecutor General's Office or the law enforcement bodies’ press services were found out to be the most cited sources of information became.

In 18.4% of the total news, the source of information were special correspondents or their own exclusives.

“IMI points out that editorial boards with a large staff have the opportunity to prepare much more of their own exclusives or to prepare its own news based on press briefings. We also took into account as its own news, responses to requests for information, exclusive comments, news from several sources and with a strong background, ” IMI expert Yana Mashkova said.

There were also some single cases where the sources of information were: press services of business in 2,7% of news (the stories had some attributes of paid-for journalism); government bodies of foreign countries in 1,8% of news; international organizations in 0.9% of news; Ukrainian NGOs in 0.9% of news; copyrighted content in 0.4% (stories that have nothing to do with news genre, but the editions published it in the news sections); political parties’ press releases in 0,3% of news (stories which had attributes of sponsored journalism).

The total sample was 1700 of stories: 100 stories, taken simultaneously from each web-based edition in January 2020.

This blog was made possible thatnks to support of the American people through the USAID Media Program in Ukraine , implemented by the international organization Internews. The content of the material is under the sole responsibility of the NGO Institute of Mass Information and does not necessarily reflect the views of USAID, the US Government, or Internews.