Women are mentioned three times less often in the news of Zhytomyr online media, these are the results of a study research in the online media of Zhytomyr region. There were almost equal numbers of women heroines and men heroes on television, but women experts were also asked to give their comment on or evaluation three times less than men experts were. These are the results of a survey of gender balance in February 2021, which was studied by representatives of the NGO "Institute of Mass Information" and " Detector Media " *.

On average, women are mentioned in a third of the monitored publications. 30% of women (out of the total number of heroes and heroines) became the heroines of news items and articles in the online media. Journalists also much more often chose men as experts for their stories. Thus, the ratio of women and men experts in the news in Zhytomyr online media is 27% to 73%. Compared with a similar study conducted in October 2020, the rate of women experts involved remained at the same level, and mentions of heroines increased from 22% to 30%. 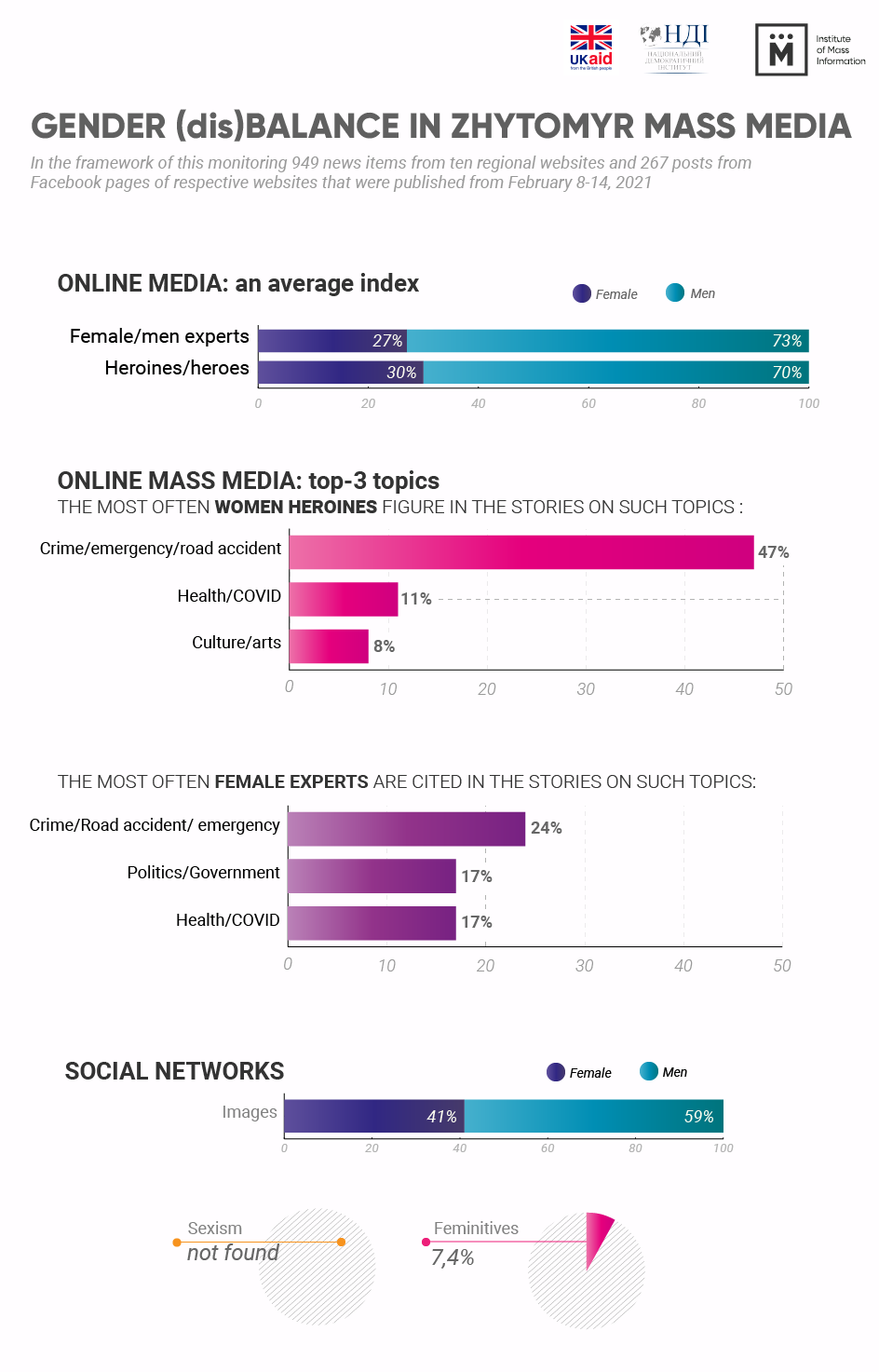 Almost a quarter, 24% of the total number of women experts, commented on news related to crimes and offenses, road accidents and emergencies. Also among the popular topics were politics (17% of the total number of women experts) and health / COVID (17%). In addition, female experts commented on education (14%), culture / arts and society (3% each). 21% of comments fell on a variety of topics from recommendations for writing resumes, weather forecasts and traffic restrictions to the stop of the clock on the building of the Zhytomyr City Council.

On the other hand, male experts most often commented on health / COVID (25%), crime / road accidents / emergencies (11%) and politics (10%). Also among the popular topics commented by men were the economy (9%), society (5%) and human rights (4%). 34% of the comments of male experts dealt with issues related to snowfall, street clearing, security issues, such as the installation of video surveillance cameras, installation of feeders by foresters, fish protection patrols, traffic failures, new technologies, repairs and public surface infrastructure.

The Novograd-City online edition managed to achieve a gender balance: among the analyzed news, 50% of topics were commented by female experts. However, male heroes appeared in the publications of this media much more often : 65% against 35% of female heroines. Closer to the balance is the online edition "Zhytomyr.info": female experts commented on 40% of topics, men experts commented on 60%. 27% of women became heroines of news of this site, 73% of men became heroes. The same ratio was currently observed on the Zhytomyr Journal website, although 43% of women experts were recorded here in October.

If in October no comments from female experts were recorded during the preparation of news on the site "Nash Berdychiv", in February these figures rose to 17%. Most of the heroines in the news are recorded on the site "20 minutes. Zhytomyr ”(44%) and“ 0412 ”(38%).

The monitoring revealed 4 publications with signs of sexism. Two of them were found on the Zhytomyr Online website. The publication "February 9, 2021 - what a holiday today, signs and birthdays persons and what can not be done today" tells about striptease as an exclusively female affair, and the edition "Posmikhnitsya" published a sexist joke.

In a photo report on training at the 199th Airborne Assault Training Center the journalists of the “0412” edition used the headline "Not a mantle, but a strong spirit warms" how beautiful paratroopers skied in the morning in the Zhytomyr region”. In publications on the training of male servicemen the journalists do not use the adjective "beautiful", but put professional qualities and improvement of combat skills in the first place.

Another example of sexism was found on the Novograd City website in an article about new production in a lingerie store. The text has the following judgments: “How can a woman feel oneself special? All you have to do is to wear a beautiful lingerie "," Stunning peignoirs and lace nightgowns will not leave your husband indifferent! ". Such words position a woman not as a person, but as an object.

Also during the monitoring, we also analyzed 267 posts on the Facebook pages of mass media subjected to our study, analyzing who was most often depicted in the photos, as well as recorded femininitive suffixes and investigated sexism elements. Feminitives were most often used on the pages of "Times.ZT" (15.6%), "Zhytomyr. Info "(14.2%)," 20 minutes. Zhytomyr ”(11.1%). Such media as "1.zt.ua", "Novograd. City", “Nash Berdychiv » did not use femininities in social networks.

To illustrate their posts on Facebook, the media mostly used images of men : 59% of them. No examples of sexist publications during the monitoring period were recorded.

In the stories of Zhytomyr channels that aired on February 8-14, 42% of women-heroines and 58% of men-heroes were recorded. The percentage of women experts and men experts is also in favor of men: 28.6% to 71.4%. So, in one of the plots of "Korosten-TV" there are seven male heroes and only one woman.

Women were heroines and experts in educational and cultural news, while men commented and illustrated sports-related topics. In addition, the Zhytomyr media employed an image of a man-master.

Half of the channels in the sample did not use femininitive suffixes in the stories (exception – UA:PBC. Zhytomyr and SK1). In some stories there were stereotypes that every girl wants to be able to put on make-up (UA:PBC. Zhytomyr, on February 11), and in the report about a woman scientist the author said that she defended her thesis for a degree in last phrase, after saying that "she likes to embroider beads, loves music, go in athletics" ( SC1, on February 11). And in the article about snow clearance, the female journalist for C-TV asked the heroine-public utility worker, "Isn't it hard task for a woman to wave a shovel like that?", Which is also a certain manifestation of the stereotype about women as the weaker sex. The monitoring did not reveal any examples of sexism on the Facebook pages of the TV channels. 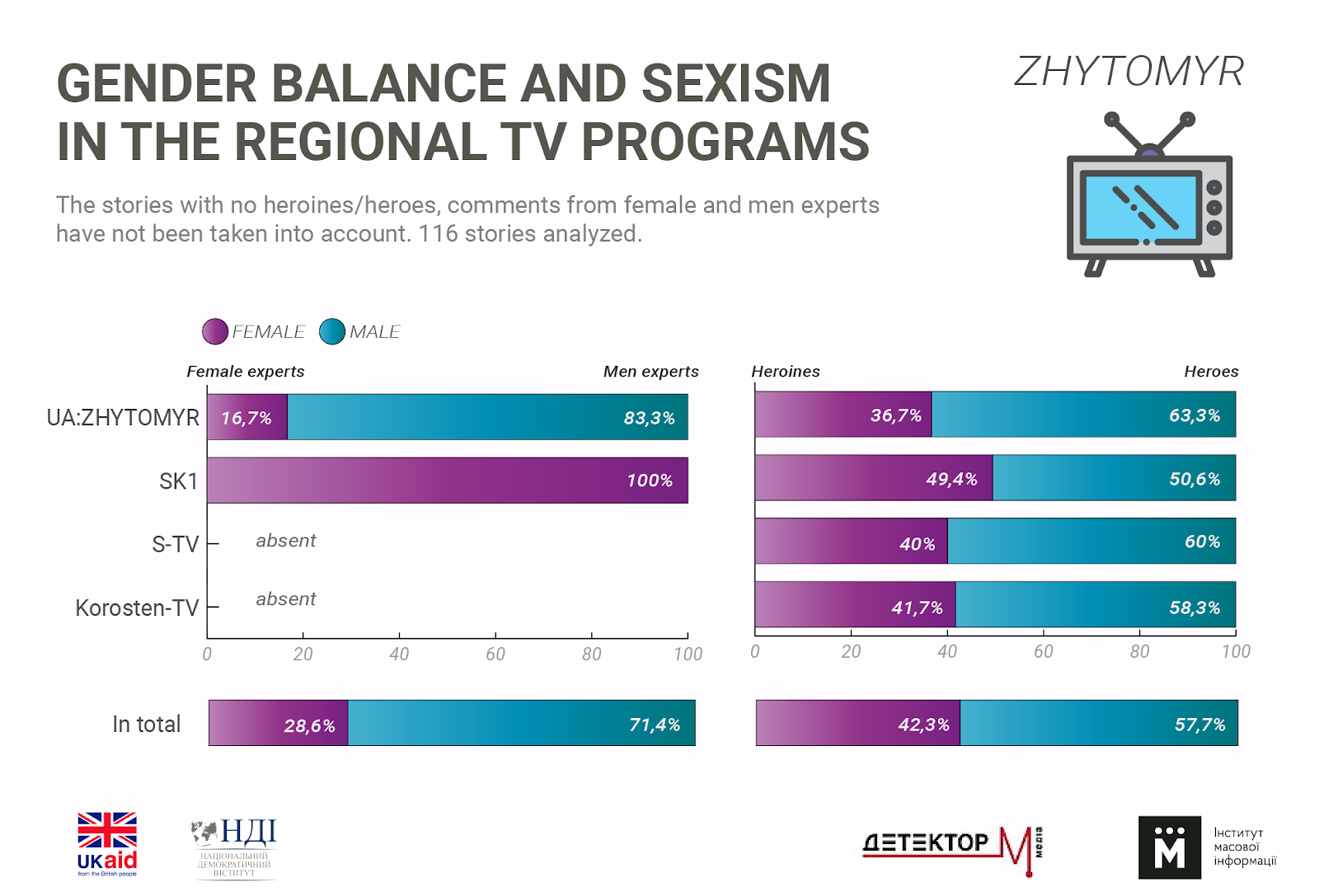