Zaporizhzhya's online media involved both women experts and heroines women not sufficiently for their news: only one in three women was an expert or heroine in the news in online media. Zaporizhzhya TV channels had almost equal numbers of heroines and heroes. But women experts were involved twice as often as men. Another positive aspect was that the number of femininitive suffixes in the stories increased, but the number of stories with sexism elements has remained at the same level.

These are the results of a study of gender balance in the online media of Zaporizhzhya, conducted by experts from the NGO "Institute of Mass Information" and "Detector Media " in February 2021 *. The study determined the number of heroines, women and men experts, as well as the share of materials with sexist expressions, the use of femininitive suffixes, and the ratio of male and female images in the relevant Facebook accounts of these media. 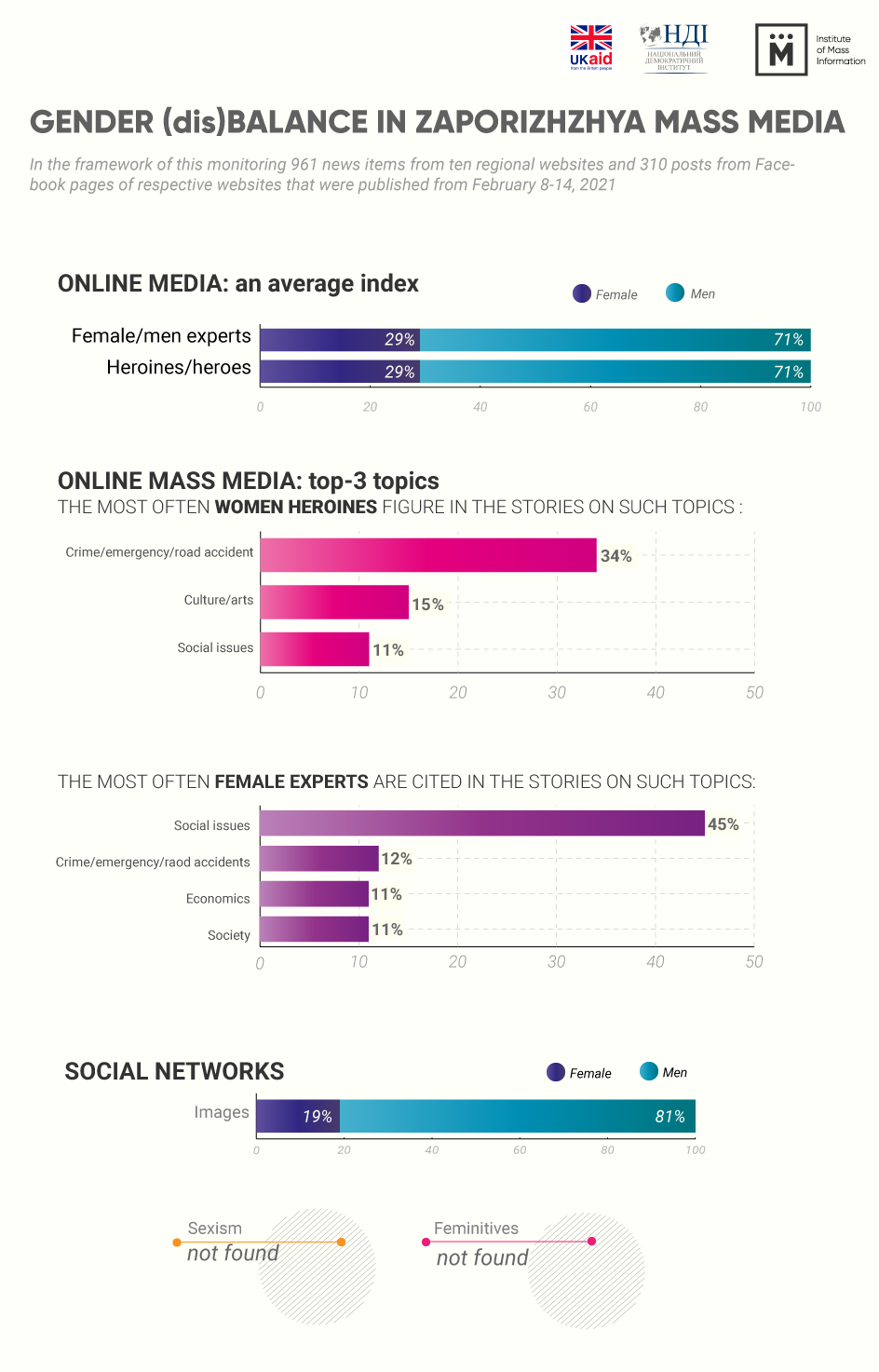 Crime / emergencies / road accidents, the economy and society were also among the top topics commented by women experts. In particular, crime / emergencies / road accidents were commented by 12% of female experts ( in October 2020 - 4%), the publications on economic and social issues had 11% each. It is worth noting that in October we recorded a significant percentage, namely 25%, of women experts in politics. Then this figure even exceeded by 6% the number of male experts cited on this topic. But such a result can be considered, rather, as an exception related to the election period. In February, only 3% of female experts were recorded in politics. In February, there were no expert opinions from women on human rights and sports.

The least of female experts were invited to comment on for Melitopolski Vedomosti (19%), Zaporizhzhya Sich (15%) and ZaBor (14% of female experts out of the total number of women and men experts in online media publications). However, it is worth noting that the site Melitopolski Vedomosti increased the level of comments by women experts from 5 to 19%.

Heroines and heroes in online media

During the monitoring period, 29% of women-heroines and 71% of men-heroes were in the publications of Zaporizhzhya websites. Most often, women figured as heroines of criminal chronicles, emergencies and accidents. Thus, 34% of women heroines appeared in the news about road accidents. We will remind, during preliminary research in October, 2020, 22% of women figured as heroines in criminal news out of total number of heroines.

Another 15% of women were the heroines of publications dealing with culture topics and 11% were in social news. There were significantly fewer female heroines in publications on coronavirus and health, as well as on economic issues: 1% respectively. There were no female heroines in the materials on human rights and ecology. At the same time, most men were also heroes of criminal chronicles and emergencies, their share was 41% of the total number of male heroes. At the same time, 12% of men were heroes of sports news, in politics and social issues were recorded 9% of male heroes, respectively. The fewest male heroes were recorded in environmental and human rights issues. However, the total number of such news in Zaporizhzhya online media is traditionally low, which affects the results of gender research.

However, the study identified four news with sexism elements, gender stereotypes and discrimination on the basis of gender. For example, the news of "Melitopolki Vidomosti"  "In Nikolaev, pregnant woman earned on drug trade"  had signs of discrimination of the woman on a sex basis. The headline can be called hyping and does not correspond to the content of the news, because, as to the text, both a man and a woman were involved in drug trafficking. However, the man’s picture was not published in the news, and attention is focused on woman who infringed the law and her pregnancy, which has nothing to do with the offense.

Two more examples concerned the objectification of the body. Thus, the report on the Industrialka website about the new circus program contained some evaluative comments on the look of the woman presenter, which are not usually employed to describe men: “The woman clown LaLoka, alias Elena Egorova, surpised the public with new gags and new look, she has got thin and became more romantic”. Also an inappropriate focus on the female body was made in a story published on the site "Zaporizka Sich", which spoke of an actress who changed her look for the role: "The actress gained 15 kg (real torture for a woman who is accustomed to being proud of her perfect forms) ”.

And the “Zaporizka Pravda “website came out with a story accentuating some gender stereotypes, in particular, regarding women's choice of clothing. Thus, the review " Outerwear - trends, brands and more" said: "Fur coats have always been on women's lists of the most desirable things and today, they also do not give up their positions," which is a classic stereotype about women's desires.

Also, the research of Facebook pages did not reveal sexist posts or headlines, and they did not use femininitive suffixes. 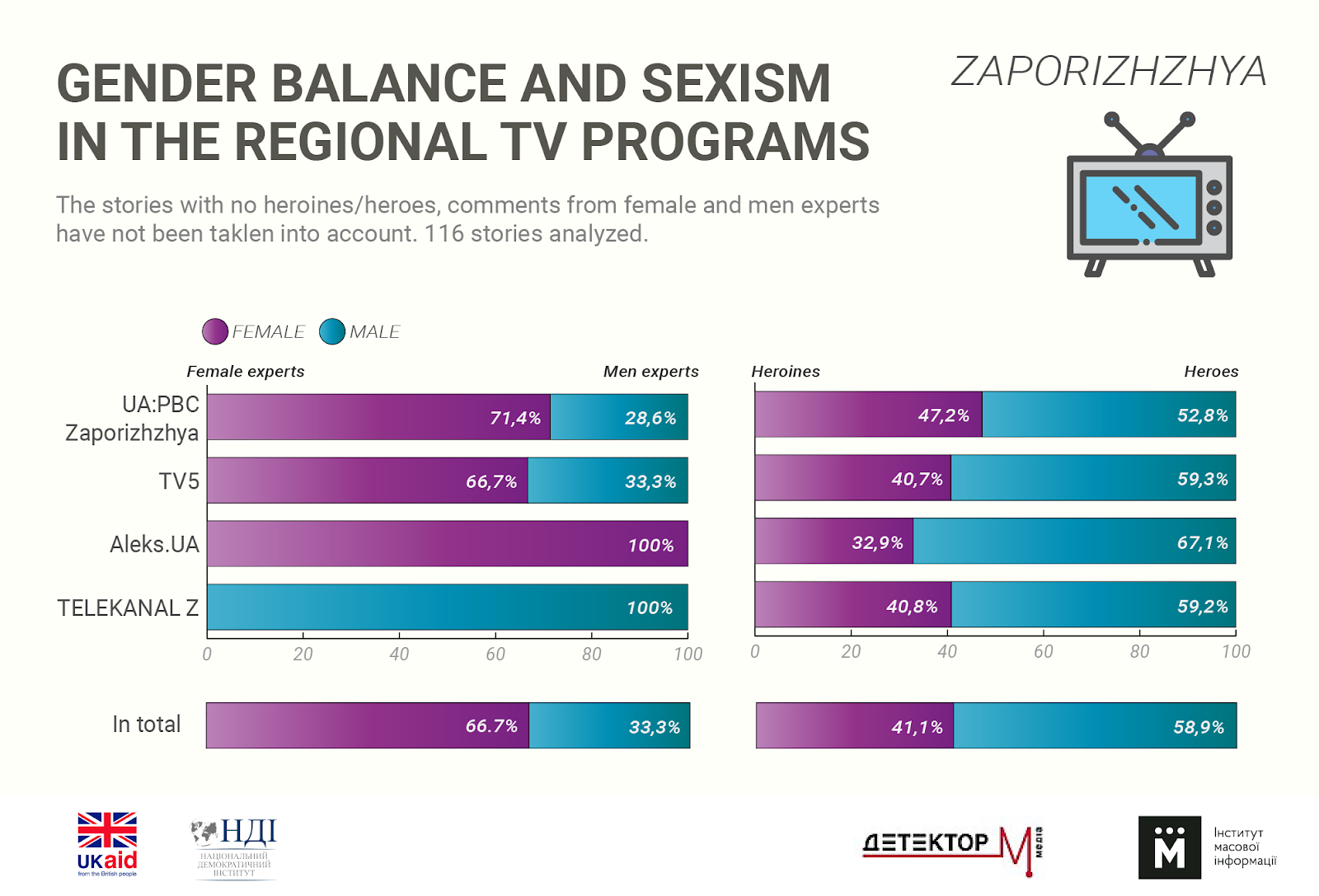 On the air of Zaporizhzhya TV channels, women prevailed in stories about education and art, and men were the heroes of stories about professional achievements, inspections of certain industries, sports, and so on.

In the story of TV5 from February 11 about the choice of flowers, a somewhat stereotypical generalization was voiced: "it is easier to please to women … you can give any kind of flowers." And TV Channel Z broadcast stereotypical generalizations that already applied to men. On February 9, in a story about a tooth fairy, a doctor said to a boy when he gave him an injection: "Be patient, you're a fine fellow, you're a man." On February 11, a story about women in science on the TV channel emphasized that women in the field of science were "beautiful and smart", which is to some extent a devaluation. The monitoring did not reveal any example of sexism on the Facebook pages of the TV channels.