These are the results of a study of the gender balance in mass media in Khmelnytsky region, conducted by experts from the NGO "Institute of Mass Information" and " Detector Media " in February 2021 *.

According to an online media survey, in the Khmelnytsky region, 38% of stories had comments or mentions of female experts, while the stories where a woman was a heroine accounted for 32%. That is to say, in 62% of cases the mass media chose men experts for their articles  and in 68% of the stories men were heroes as well. However, when comparing these figures with data of the previous monitoring. Khmelnytsky online media mentioned the female experts 18% more oten in their texts (in October 2020, the figure was only 20%). Also the context of heroines’ presence in the stories got improved, but the growth was not significant and amounted to only 3% (from 29% to 32%, respectively). 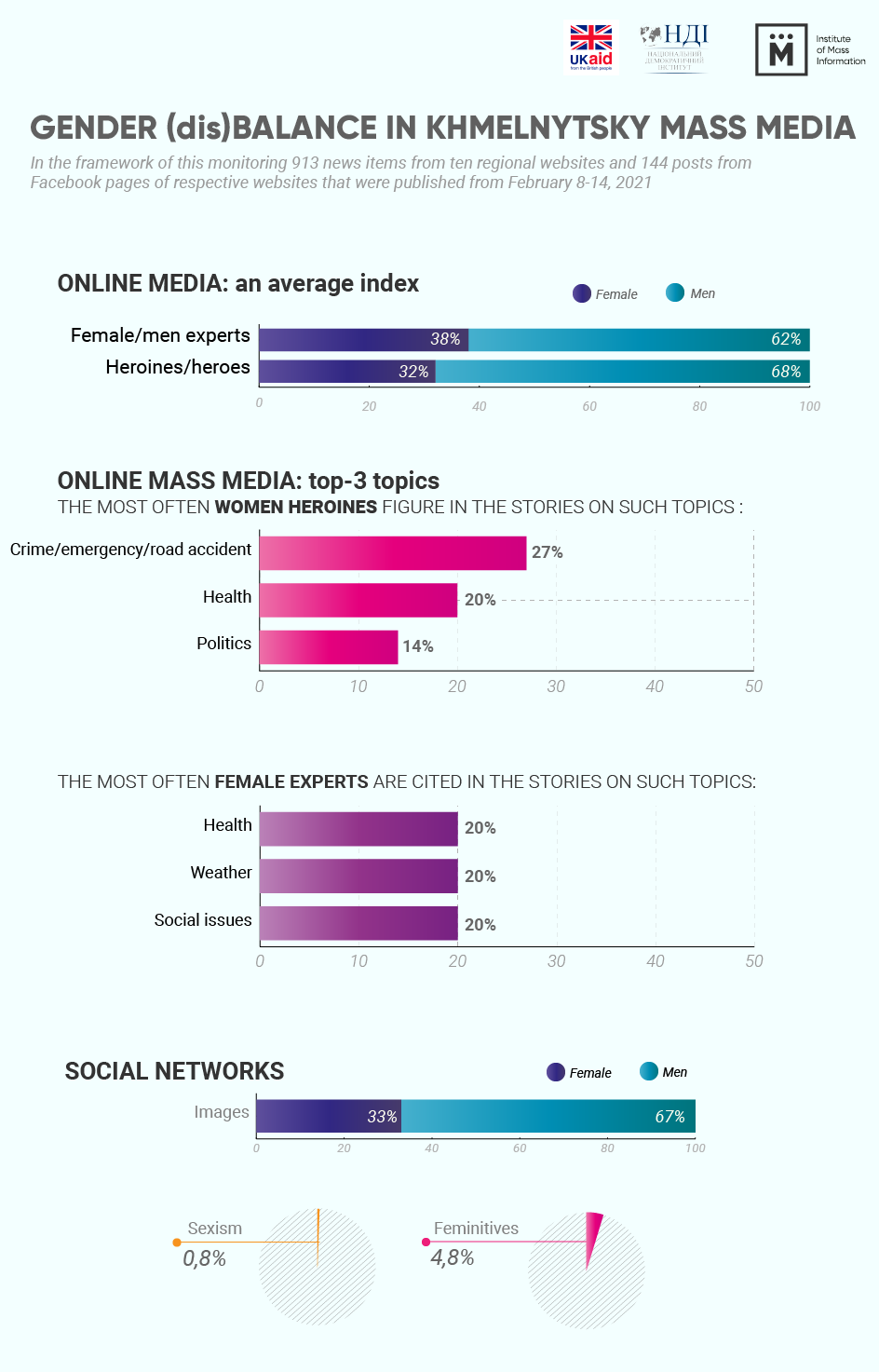 Leadership in abidance by gender balance and quoting the women experts has been retained by the online resource "Novyny. Khmelnytsky”, with the ratio of 50/50 both in October 2020 and now. Also two mass media (“KhM-insight “ and “Aktualno dlya Podolyan”) joined the team. Last October, “Khm-insight” had only 14% of women experts quoted, but now it is 50%. But according to the results of the last monitoring, “Aktualno dlya Podolians” had not quoted women at all on October, but now this figure is 50%. However, the gender balance principle was much badly respected in the stories where they mentioned women-heroines and men-heroes. In this issue, the best ratio was seen in the online media “0382.ua”: 39% to 61%. Then it follows the online resources " VSIM" and " Novyny Khmelnytskogo "Ye" with rates of 37% with women-heroines to 63% with men-heroes for both. At the same time, the indicator of “VSIM” has significantly deteriorated since the last monitoring period, because then the ratio was 49% to 51%.

Most often, the journalists involved the women as experts to comment on the following topics: health, weather and social issues (20% of women experts out of the total number of female experts in the stories). Compared with the previous monitoring where the politics was the top subject, this time, this topic had only 13% and seated the 4th place of honour, what, of course, was due to the political passivity in post-election period. Women became heroines in news on criminal issues, emergencies and road accidents (27% of women heroines out of the total number of women heroines), as well as in the stories on health (20%) and politics (14%). In October, the political news with women-heroines had been in the top (the phenomenal figure: 82%).

In 33% of cases, mass media used images with women to illustrate their posts on Facebook , ie in 67% of cases, they chose images with men to illustrate the posts. If we talk about some precise indicators, the best practice of use of images with women was seen in online media "Podillya NEWS" (51%) and Depo.ua (50%), and the worst results were observed in “Podolski Novyny”, “KhM-Insight” and “Novyny.Khmelnytsky” (according to 20% each). The reason may be that not all the stories that mentioned women put images with women as the main picture. Most likely, the media were guided by the idea that it was easier to put a general picture than to select it based on the subject of the story and taking into account the mentions of women.

The use of online media in the Khmelnytsky region by femininitive suffixes has also deteriorated significantly. In the previous period, which coincided with the local elections, the femininity index was as high as 28.6%, now it has dropped to 1.7 %. In total, only 46 news items with femininitive suffixes were identified, ie only every 20 text in the online media newswire used them. The best indicator of use of femininitive suffixes was recorded in "Aktualno dlya Podolians" : 38%. At the same time, it should be taken into account that only 27 news items of this online publication were monitored, which could also affect the calculations. However, in October 2020, this figure in this media was generally zero. Further, two more online media had the index of femininitive suffixes at 26%, namely the Independent Public Portal and “KhM-insight”. Compared to the previous period, these publications significantly improved their previous indicators (17% and 11%, respectively).

The worst indicators were observed in Depo.ua and 0382.ua (9% and 11% respectively). At the same time, this percentage got improved significantly, if compared to the previous period (in two cases it was 4%).

During the monitoring period, 3 cases of sexism were recorded. The elements of gender discrimination as form of sexism was identified in “Vsim.Khmelnytsky”, in the text titled "Physician aged under 30 :Khmelnytsky female resident Alina described the path from dancing to work at the Infectious Diseases Hospital” and the story in Depo.ua Khmelnitsky " The police revealed details of the" female” road accident with two injured persons” and the story of “Podilski Visti” " Not to know A from B… ". By the way, during the last monitoring no such "mistakes" were seen in the online media of Khmelnytsky region . In the first case the emphasis was placed on the age and appearance of the family female doctor, in the second they said that two women drivers made a road accident, and in the third they focused on the attitude of a women to political force in not quite correct manner. For example, the following words were used in the material: "female servants, maids, maid servant, servants of the people."

When writing the story, the journalist should understand that a person's professionalism or unprofessionalism does not depend on his or her age, appearance, gender, or even political power. However, sexism was also recorded during the monitoring of online media posts on Facebook. Again gender sexism allowed online resource Depo.ua in the post accompanying the story  “ Battle of goals: What they fights for : the head of Khmelnytsky Regional Council with the head of Khmelnytsky Regional Administration ." We quote: "A woman's strength is probably given by an uncontrollable desire to prove to everyone (whether to herself or her own husband) that she is not just the MP’s wife, but she is talentuous and separate woman politician who can represent the party policy in a separate territory."

In the news of Khmelnytsky TV channels, women-heroines accounted for 31.4%, and men became heroes in 68.6% of cases. There were significantly fewer female experts than male experts : 18% vs. 89%. Women as heroines and female experts were present in the stories covering education, upbringing of children, sphere of services. Instead, men were portrayed as hunters, builders, rescuers, politicians, and so on. 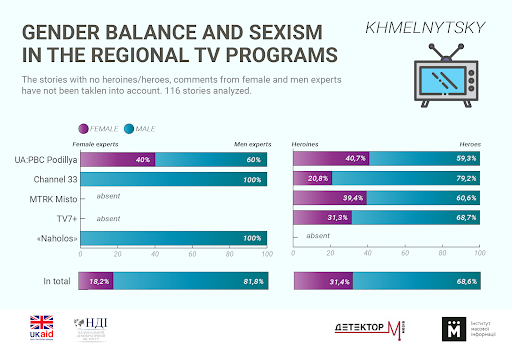 Journalists of local channels also spreaded the stereotype that a woman's look was most important, in particular in the program MamaInstagrama on TV7 + from February 8 about Ivanka Vityuk, who throughout the program talked about her appearance, namely about her hair, which she is very proud of.

On TV5, a man said: “We selected a lot of girls whose parameters fit: waist, legs, neck… There are girls with a slim waist, but the arms are big, well, we had to make a feminine fairy of her. Some girls came, we measured them." The authors of the reports do not influence the content and form of the characters' words, but they make a choice of which words to put in the story, so they are also responsible for the spread of objectification.

And the host of Channel 33 in a story about women in science on February 11 tried to joke, but it turned out, to put it mildly, awkward: "The place of women is in the kitchen (long pause)… in the science." The monitoring did not reveal any examples of sexism on the Facebook pages of the TV channels.