Most news in Odessa mass media speak of men: results of gender monitoring

Mass media in Odessa have been mentioning women about three times less often than men. Only 23% of Odessa online media news is about female heroines, while 77% of local media reports are about male heroes. In the news of Odessa TV channels and radio stories, the women-heroines, as well as women-experts, are also significantly less present than men heroes and men experts. 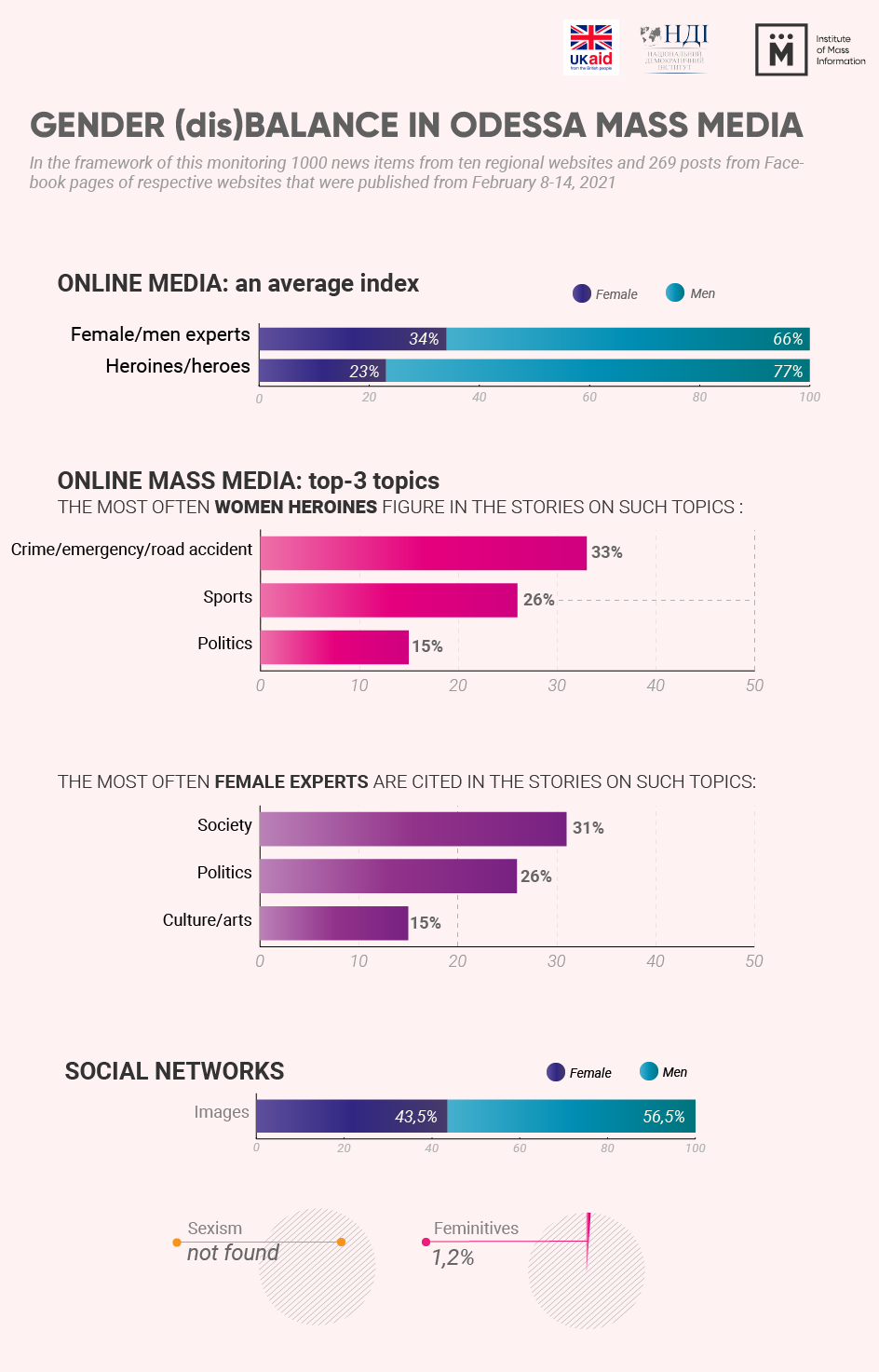 These are the results of a gender balance study conducted by experts from the NGO "Institute of Mass Informationa" and " Detector Media " in February 2021 *.

It should be noted that the most frequent mentions of heroines and heroes in the online media occurred in the stories about crime, emergencies and road accidents (33% and 45% respectively). These figures are within the general trend of populism and coincide with the results of other IMI monitoring, which found that since last years, about a third of all news in the Odessa media have been related to emergency news ( 40% in 2018 and 33% in 2020 ). At the same time, the same 40% of posts on the pages of Odessa media on social networks also concerned "high profyle” topics.

Stereotyping of gender roles in our society is clearly seen in the work of the Odessa mass media. Thus, in political news, women were heroines in 15% of the news, and men were in 26%. At the same time, women were mentioned three times more often in the stories about art and culture (9% vs. 3%).

The highest number of reports with women-heroines was on the sites "Timer" and "USI" (32% and 30% respectively), the least number was in the editions "Dumska", "Odesit" and "Izbirkom" - (15% each).

Odessa online media quote female experts in only 34% of articles, while 66% of comments in mass are the male experts’ ones. These indicators almost completely coincide with the results of similar monitoring conducted by IMI in February and October 2020. At that time, female experts were mentioned in an average of 34% and 36% of the stories, respectively. The only exception was the results of gender monitoring in the run-up to the 2020 local elections. Then, for the first time in a long time, more comments from women experts were recorded than from male experts (52% and 48% respectively). This exclusion from the general trend can be explained by the increase in the number of women candidates for elected positions and the intensification in the media of various monitoring public projects with the participation of women experts who commented on the election campaign.

During the current monitoring, online media cited female experts the most often in the articles about society (31%), politics (26%) and culture (15%).

Comparing these indicators with previous studies, it can be concluded that the number of political news citing women experts increased by 10%. The exception is again pre-election gender monitoring, when 60% of the news female experts was about politics.

The monitoring revealed 2 cases of sexism and discrimination against women (in October 2020, there were 5 cases ). Thus, in the news " A foreigner robbed a car of a ladydriver in Ilf and Petrov street " the term "car of lady driver " is incorrect, as in this precise case, not only being somehow insulting, it focuses the audience's attention on the sex of the car owner, and not on the theft. This is a fairly common "label" in the local media, which does not embellish the news and language.

Also during the monitoring period, Odessa law enforcement officers detained the organizers of an unlawful sex agency in the city. Accordingly, several reports appeared in the regional media with such expressions as "brothel" and " prostitutes ". One media outlet reported that the police did their job "with a striking effect", adding some elements of humor and irony. In such a case, it would be correct to use emotionally neutral vocabulary and the terms "sex professionals".

The news " Golden Watch : in memory of love: in Odessa region, a man robbed his concubine " is also full of gender stereotypes. Not mentioning any specific detail of the case, the correspondents concluded that the woman "kicked out" an "adventurous lover" who stole her watch "in memory". The usual press release from the police was issued with such subjective details.

At the same time, 24% of the news featuring women had femininitive suffixes. They were most often used by the correspondents of “Bessarabia Inform”, “Odessa.Online” and “Odessa-Media”. Among them we found some usual for our ears "Odessa female resident", "female resident", "female teacher", and more rare expressions: " female patrol officer" (Pushkin) and " female leader " (“Izbirkom”).

During the monitoring, 269 posts of the mentioned mass media on Facebook were also analyzed. It should be noted that the number of posts with images of women and men is almost equal and is 43.5% and 56.5%, respectively, of the total number of posts where there were images of people. But only 1.2% of posts featuring women contained femininitive suffixes. There are no cases of sexism or discrimination on the grounds of sex found on Facebook.

There were fewer female heroines in the news of Odessa TV channels and radio stories than male heroes : 37.6% to 62.4%, respectively. The ratio of female and male experts was also in favor of the latter : 77% of men and 23% of women. 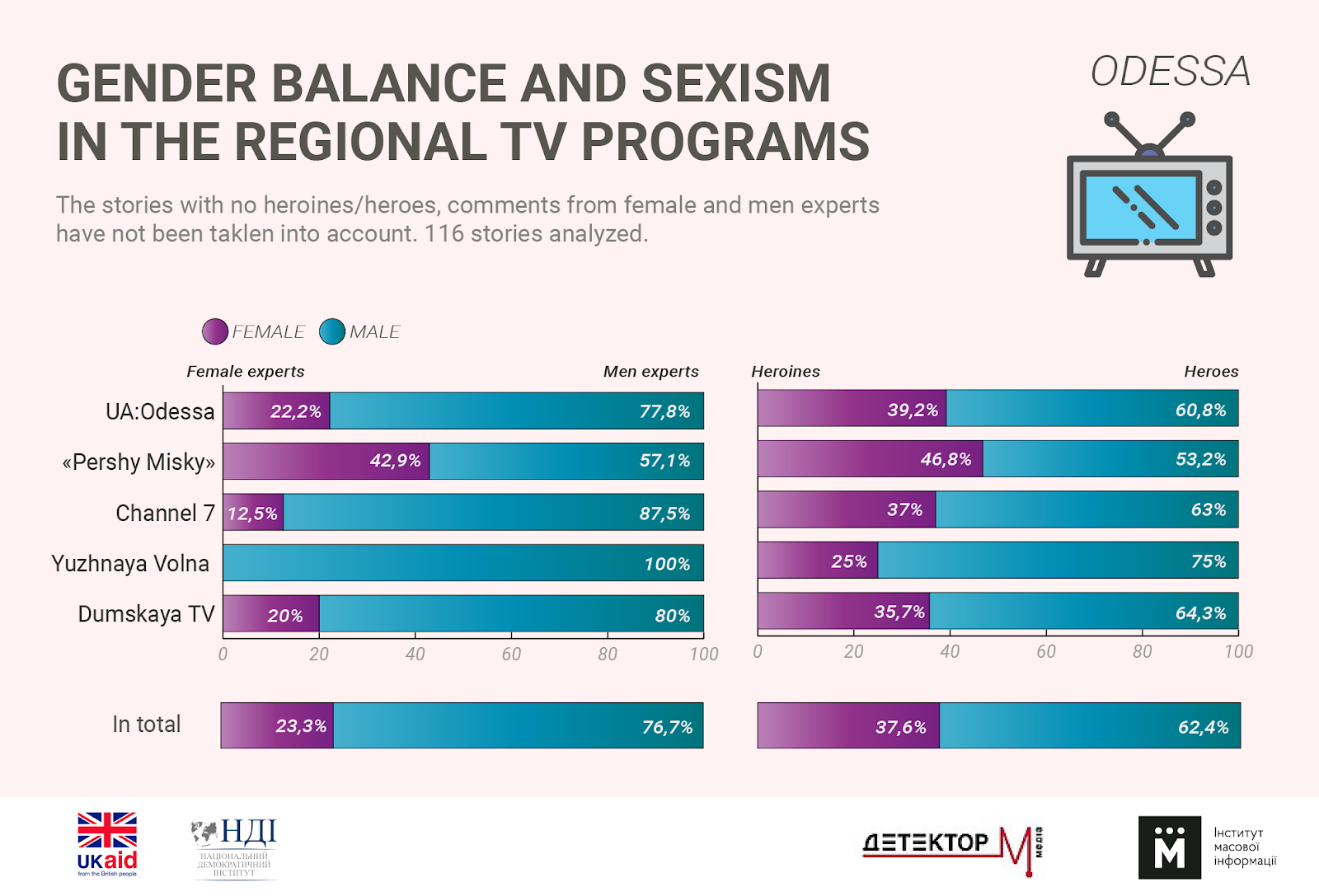 Women-heroines and female experts in the stories of Odessa TV channels were both in topics familiar to women, and in stories where they defended their own rights or the rights of the community along with the men. At the same time, some materials had elements of sexism and stereotypes. So, in the advice about what gifts to choose for Valentine's Day on Channel 7 they say "all girls take care of one’s look, figure." On the “Yuzhnaya Volna” while speaking of a female participant in a beauty contest, a heroine says: "When she sat down, these gorgeous hips, these long legs… we called her a high-bred doe." The texts about the beauty contest with elements of objectification also appeared on the channel's Facebook page.

In the story of “UA:PBC.Odessa” dated of February 12 the hero calls Odessa "the man's city" because dynasties of seamen work here. In general, this was correct idea, but presented in a clumsy and discriminatory phrase. The female journalist who interviewed the person did not make any remarks to the interlocutor and did not indicate that she did not agree with the thesis.

Sexism is also in the story from February 14 about the work of flower markets on Channel 7. The man say that the markets work with a speed, since "everything the best is for you, our beautiful." Also on Channel 7, the protagonist of the story about the "love story of the Dmytruks" say that his wife "got some" (it is not clear whether he was meaning physical violence or moral one), if his wife failed to satisfy his gastronomic needs. The monitoring did not reveal any examples of sexism on the Facebook pages of the TV channels.