In 2017, in Ukraine there were 281 registered freedom of speech violations — IMI (updated) 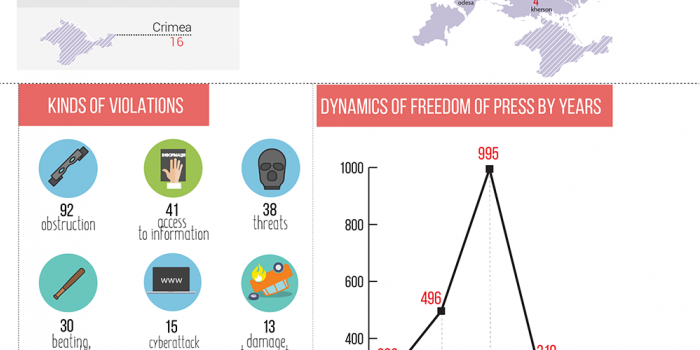 This is the data of the annual research of the Institute of mass information “Freedom of Press Barometer”.

The three top categories of violations were obstruction to lawful journalist activities, limitation of access to public information, and threats and intimidation of journalists.

The top category by the number of cases of violations in 2017 was the category “obstruction to lawful professional activity of journalists” – 92 cases. At the same time, the number of obstructions in 2017 somewhat decreased, compared to the previous years (in 2016 – 108 cases, in 2015 – 100 cases, in 2014 – 150 cases, in 2013 – 130 obstructions). The parties that were obstructing the journalists are mostly, just as in the previous year, private individuals, local authorities and law-enforcement officers.

By the number of violations, assaults and beatings of journalists were on the fourthplace – 30 cases. The number of attacks against journalists remained unchanged, compared to the previous year (for comparison, in 2016 IMI experts registered 30 assaults, in 2015 – 58, in 2014 – 286. According to the IMI research data, the attackers on journalists and violators of freedom of speech in 2017 were prevalently private individuals (156 cases), local authorities (50 cases), and law enforcement agencies (33 cases). Before, in two previous years (2015 and 2016), IMI observed the tendency where the offenders were mostly private individuals. For the context, in 2013-2014, the aggressors and violators of journalists‘ rights were mostly law enforcement agencies officers and local officials.

In addition, a negative tendency is increase of cases of damage to the property of journalists: since the beginning of this year, 13 cases were registered, compared to the last year when there were only 4 such cases were.

“This year, increase of freedom of speech violations, compared to the same last year period, took place at the cost of such categories as: access to public information, cyber attacks, damage of journalists’ property, and political pressure. In particular, the indicators on the two last mentioned categories increased by three times. Also, the increase was at the cost of increase of lawsuits against mass media, legal and economic pressure”, IMI media expert Kateryna Diachuk reported.

In 2017, the regions with the most violations (except the occupied territories), just as last year, were Kyiv and its oblast (80 cases), Volyn (24 cases), Mykolaiv region (20 cases), Poltava region (18 cases) and Odesa region (15 cases). It should be pointed out that it is the second year when “top five” regions by the number of cases of violations of journalists’ rights includes Volyn, Mykolaiv and Poltava regions.

In the occupied territories of Donetska and Luhanska oblasts, IMI managed to register only 3 cases (in 2016 – 12 cases of freedom of press violations). This is due to limited access of Ukrainian journalists to this territory. In particular, this year in the occupied Donetsk, blogger and author in the Radio Liberty project “Radio Donbas.Realii”, Stanislav Aseyev, disappeared – he was writing insider materials for Ukrainian mass media. In addition, in 2017, so–called “DPR” kept prisoner  the blogger Eduard Nedeliayev, who was recently released. For comparison, last year IMI registered 3 cases of imprisonment of journalists in the occupied territories of Donbas, and in 2015 – 16 such cases.

In Crimea annexed by Russia, in 2017 there were 16 registered cases of freedom of speech violations, which is only half of what was registered in 2016 (31 case), or in 2015 (43 cases). “Decrease in the number of registered violations is not an indicator of absence of such violations, it is an indicator of limitation of access to the peninsula and control of the Russian authorities over the information sphere. In addition, it should be taken into account that many editorial offices moved out of Crimea because of pressure of occupation authorities and impossibility of work there”, Kateryna Diachuk, IMI expert, pointed out.

This year, in Crimea the “trial” against the Crimean journalist Mykola Semena, thatstarted last year, ended – FSB of Russia accused him of separatism. On September22, Zaliznychyi district court of Simferopol, sentenced Mykola Semena to two and ahalf years, with suspended sentence of three years and a prohibition to conduct public activities. On December 18, the Supreme Court of Crimea partly mitigated the sentence to Semena in relation to the additional punishment. In particular, the banfor public activities was shortened from three to two years.

“Thus, the main tendencies in 2017 the sphere of freedom of speech are certaindecrease in the amount of, specifically, physical aggression against journalists(obstructions, assaults and threats), on the background of deteriorating situation with access to public information, and growth of political and legal pressure. I mustseparately emphasize the impunity of high–profile crimes against journalists – thecase of murder of Pavlo Sheremet remains uninvestigated, and the actual accompliceof the murder of journalist Vyacheslav Veremiy received a suspended sentence, attackers against the journalists of “Skhemy” also were never punished”, said executive director of IMI Oksana Romaniuk, “As to the forecasts for the year to come, we expect new challenges related to freedom of speech, due to parliamentary and presidential elections in Ukraine drawing near. We also cannot exclude emergenceof new threats for the physical safety of journalists in the conflict zone in the East ofUkraine and deterioration of situation with freedom of speech in the annexed Crimea, due to presidential elections in Russia in 2018. Also, the trend of increase ofcyber attacks against mass media and journalists will continue – this is the tendency we already observed in the last several years. We appeal to journalists asking themnot to forget to report about crimes, and to file official complaints to law enforcement agencies on an obligatory basis, not to allow the offenders go unpunished”.

For more details about the condition of freedom of press, please refer to IMI website, section «Freedom of Press Barometer».

Institute of Mass Information conducts monthly all–Ukrainian freedom of speechmonitoring in the following categories: physical aggression, censorship and access to information, economic and political pressure, legal pressure and cyber-crimes against mass media and journalists. The monthly report includes only cases related to freedom of press and professional journalism. More details on the methodology can be found  here.

Did you like the article? Help us to be even more cool!
Other monitorings 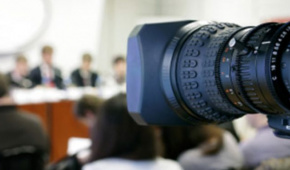 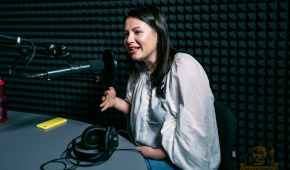 “In the early phases of the war, we couldn’t even love”. Iryna Zemlyana's interview for "Fixers and Stringers" 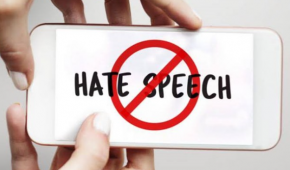 Roma, hasidim and minorities that feel beneath others: hate speech in regional media
Blogs
Sanctions against Medvedchuk’s TV channels. The first estimates
Do you want to be first to learn about the new research of the Institute of Mass Information? Subscribe to the newsletter!